, I replied back that I wasn’t a man but I happen to have one that I’d happily subject to their product testing. They don’t test on animals, but willing husbands are free game!

I should note that my husband is a fan of fancy face cream. If he runs out then he dips into mine. So I knew he’d be into trying it, I just wasn’t sure how he’d be at giving me an in-depth review. He gave the anti-aging face cream a try, which is made with Dead Sea minerals, argan oil, jojoba oil, vitamin E, African shea oil and dunaliella extract.

I had our son model the manly face cream since I kept forgetting to get my husband to do it. He wore a hat and tie for the occasion: 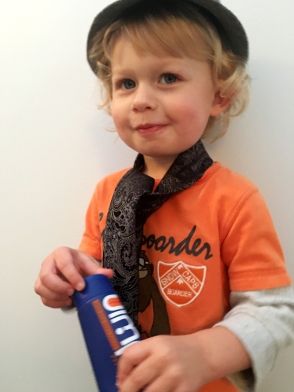 So this is how it went the first night he tried it:

Me: How does it feel?

Me: Greasy? Like it didn’t soak in? or slimy?

Hubs: I think I used too much. It’s very fragrant. (he starts moving toward the bed and is still a good 12 feet away)

Me: I can smell you from here!!

Hubs continues to get into bed.

Me: (hiding under covers) I can still smell you! You need to try it again in the morning.

Hubs: But it says it’s for nighttime use!

The next day he left for a business trip and took his cream with him. He used it every night and continues to use it now. He said it just takes a little and it isn’t greasy. He did, in fact, use too much the first time. Getting a descriptive review out of him was not all that easy but he did say he liked it, his skin feels good, and he actually likes the smell. I’m very sensitive to smells so I still tell him to use it at least an hour before bed. The smell is one of those strong “manly aquatic” smells. It’s nice in small doses.

So the final test results are: Mens Nourishing Cream

is good cream with a powerful manly cologne smell. It just takes a little, which means it will last a while. And you get to go to bed with a good smelling man with soft skin, so it’s a win-win all around. You can purchase it on Dead Sea Minerals Cosmetics .

Check out our Book!

The No Ricochet Nippers from #Revlon are heavy duty! I got these to try out, plus a box of Color Effects in my latest #influenstervoxbox . I thought these were going to be the lightweight kind for cuticles, but they are big and sharp and definitely for nails. The little red cover is magnetic and block mail clippings from flying all over the place.
Summer vacation in full swing…literally. 😊
If you saw the unboxing a couple posts ago, then you know I had to go and dress up in the hat and whip 😆.
I updated my blog post about @lettucegrow today. After two months of hydroponic gardening I'm hooked. I pick fresh food daily! My plants got so big I had to learn to add a trellis set-up, which was really easy to do. And I transplanted some of the larger ones to my regular garden.
I have seen dolphins all my life growing up in FL, but still EVERY time I’m going to excitedly shout “oh a dolphin!!” And point and watch 😍
Just trying to get one good pic with my mom and the kid 😆.