*** Updated Intro – Funny thing about this post. I ran across it in my drafts and realized I’d never published it. This post is from the viewpoint of having a freshly minted two-year-old. I now have an almost three-year-old and it’s a world of difference. A lot of these toddler dreams are slowly coming true! Seems maybe they do finally come around after driving you crazy the first couple years. Oh, I’m sure I’ve still got plenty ridiculous toddler antics in store for me. But I can finally see the light at the end of the tunnel. It does get better!

*** Original post – Before I had my son, I had no idea what it was like to have a child or even be around one. I went into this whole parenting thing about as clueless as you can get. I managed to dream up all these wonderful things we would do together, and now I get to watch my son systematically destroy each sweet toddler fantasy one by one. I keep telling myself things will change as he gets older. I’m really hoping there’s a sweet spot between crazy toddler and rebellious teenager. So here’s my list of my silly mama dreams and the crushing reality.

1 – The Dream: We will read books together, he will love them and it will be magical.

The Reality: He prefers to try and eat them, kick them, always has to see the last page first and rip a few pages out for good measure. This doesn’t stop me from trying, but it did stop me from getting any more books with fragile paper pages.

2 – The Dream: We will take fun classes together like “Sway and Play Yoga.”

The Reality: He threw all of the scarves at the girls, tried to get them to chase him, then ran out of the room making dinosaur noises.

3 – The Dream: I get to dress my son up in all kinds of costumes! I finally have an awesome baby accessory.

The Reality: I can’t even get him to wear a hat more than two minutes, much less a costume. So he now has an impressive collection of costumes that just require a t-shirt.

4 – The Dream – We will go to museums and learn things! We love learning!

The Reality – We went to a neat science day at the Museum of Science and History. He didn’t want to do any of the crafts and just wanted to throw the cotton balls out of the sensory bins. And we had to go stare at the dinosaur 17 times instead of watching the cool science show.

5 – The Dream – I will raise an adventurous eater!

The Reality – My son is trying to prove you can survive on a diet of hotdogs and air. Far from adventurous, he won’t even dip his hotdog in ketchup. He hates trying anything new unless it’s chocolate in a different form, or made of a gummy bear type substance.

6 – The Dream – I will raise him to be bilingual and speak Spanish!

The Reality – Why I thought my two semesters of Spanish and being able to ask where the bathroom was qualified me to teach a child to speak Spanish is beyond me. I was super thrilled when he just started stringing English words together! I do still actually intend to teach him the basics when he gets a little older though.

7 – The Dream – I refuse to believe everything I’ve read about boys being potty trained later than girls. My son is going to be out of diapers by the time he turns two.

The Reality – Ha! Ha. Ha. Ha. Bwahahahaha. Wow was I clueless. We are heading into three and though we’ve made some progress, the only thing I can get him to do regularly is put Iron Bear on the potty. He’s like a poop surrogate I guess. 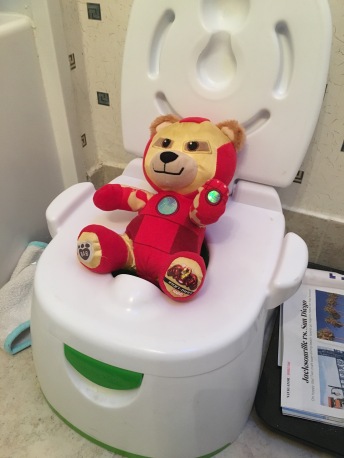 8 – The Dream – Brightly colored kid stuff will not take over my house. We will keep it tidy and neutral.

The Reality – My house has brightly colored, blinking, music playing things in every corner. You can’t go anywhere without bumping into or stepping on something that springs to life and starts making noise. And everything is rainbow colored of course.

9 – The Dream – Speaking of noisy toys, none of those for us!

The Reality – Yeah, so you may not buy your child noisy toys, but everyone else will! My cousin got my son a guitar that plays 30 different songs and my son’s favorite song is five seconds of every single one, over and over again. I can’t think of one thing I’ve done to her to have deserved this.

10 – The Dream – We will go everywhere together! I love having a little sidekick.

The Reality – I never thought there’d be a day when the highlight of my week was going grocery shopping by myself. And it’s been so long since I’ve been to an actual store to try on clothes, I’m starting to think Amazon was created for moms so they wouldn’t have to wear the same clothes the first few years.

For all my complaining, we do have plenty of good times. Even our adventures that don’t go as planned (roughly 98% of them) are still worth the effort and make for (mostly) good memories. I haven’t given up on any of these dreams, I just realize now that they all take a lot of work and nothing comes easy in the real-life parenting world. And if all this stuff did come easy for you…you probably have a girl, lol. Because I also had to accept all that stuff everyone says about having boys is TRUE. But that’s a topic for another blog…

New Geek of the Week feature on GeekMamas.com today featuring author and Cosplayer Danielle M. Orsino who recently released book 2 in the Birth of the Fae series, Thine Eyes of Mercy.
New blog post today all about Goodles! It’s a nutrient rich Mac and cheese product made with all the good stuff and none of the bad like gmo’s and artificial flavors.
Somebody is after my Magic Spoon cereal! 😆
Keelan and I had fun trying out @bokksu , a premium Japanese snack and tea subscription box!
Does your neighborhood have “fairy stops”?
New YouTube tutorial and blog post! #linkinbio👆