Nickelodeon’s Blue’s Clues & You: Blue’s Sing-Along Spectacular on DVD was just released February 2nd and to celebrate we were sent a BIG box with everything we need for a fun family karaoke night, and one lucky reader is going to win one too! (Giveaway ended 2/19/21) Check […]

The whole Etsy shop is on sale for the holidays, including new Super Hero Gift Sets! The set comes with the book I’m Going to My First Comic Convention, plus a sheet of stickers, and your choice of cape and mask or a Wonder Woman accessory set (or […]

We Got Slimed and It Wasn’t Fun

My son recently walked into the kitchen to surprise me with a head full of slime. Specifically Poo Doo slime from the Dollar Tree. He giggled at my look of horror as he modeled the nasty brown goo that was oozing its way down his lovely shoulder-length blond […]

I’m excited to announce the very first store to put our book on its shelves is Mythical Mountain Comics and Games! They have two locations- Jacksonville and St. Augustine and you can find I’m Going to My First Comic Convention on the shelves in the children’s section of […] 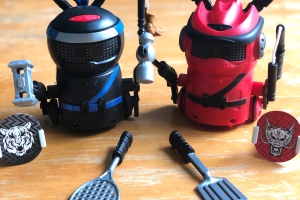 Last weekend I hosted a small gathering for Tryazon featuring three really cool toys by Spin Master: Monster Jam Megalodon Storm, Ninja Bots and Air Hogs Stunt Shot. The kids went crazy over the toys and the adults got in the fun as well. The toys were provided […]