Boys Can Wear Pink Too

My son loves PAW Patrol, and his favorite pup is Skye. Skye just happens to be a girl and he thinks she’s very pretty and flies a cool helicopter. So when it comes to choosing a PAW Patrol shirt, of course he goes right for the ones with Skye on them. The only problem? Every shirt with Skye is bright pink and covered with hearts and flowers and some kind of “girl power” message, as if they need to make the shirts as girlie as possible.

My son, in his favorite shirt

Except here’s the thing – it’s not really a problem. My son doesn’t care. He also looks pretty good in pink and loves to wear his Skye shirt. He’s also a big fan of Everest too, and all the pups.

So last night he wanted to wear his shirt to dinner and my husband suggested about 50 times that maybe he wanted to change his shirt. When I asked what the problem was he claimed “The other kids will make fun of him and call him a girl.”

He’s three. Other three-year-olds will most likely just think it’s a cool PAW Patrol shirt and not give a damn. Get over it.

So he got to wear his pink shirt to dinner and of course not one person even mentioned it. Nobody called him a girl. Nobody made fun of him. He even made friends with a little girl and showed her his cool Spider-Man backpack filled with cars.

Our son is usually a boy with a capital B. Our days are filled with cars, dirt and farts. But he also has a sparkly dress he sometimes likes to run around in, much to my husband’s dismay. And occasionally he requests to have his toenails painted, or sport a feather boa or maybe even try on my high heels. I think it makes him a pretty well-rounded kid and I don’t have any plans to make him feel weird about his choices. Although I do think it would be nice if they could make girl characters available in something other than pink and lavender! 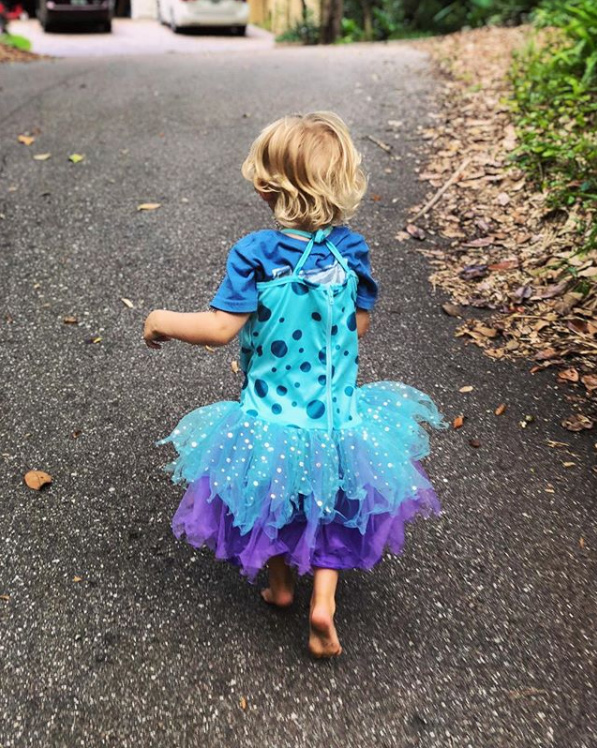 My son, who is such a typical boy most of the time, also happens to love a certain sparkly dress.