A lot of my “over-40” cosplay choices are not quite the same as the characters I chose in my 20’s. Add in the post-baby bod issues and an emphasis on family-friendly choices that cover most of my bits and that cancels out most the costumes from my 30’s as well. But some costumes I just can’t get rid of until I feel I got them just right, and that’s the case with Leeloo and her orange suspenders.

It started twenty years ago, when I was 23 and in college at the University of Florida. Halloween was approaching and there was just one thing I wanted to be: Leeloo from The Fifth Element.

It was the late ’90s, so there was no Amazon where I could order up a Leeloo and have it on my doorstep the next day. There was only one way to make a slightly obscure costume happen back then, and that was to make it myself.

Since I didn’t have the budget or resources to buy latex, I got creative with the suspenders and made them out of orange ribbon I found in the discount bin at Jo-Ann Fabric. I cut each hole out and then stapled the entire thing together. I put Velcro in the crotch so I would be able to get in and out of it. The tan leggings were found at Goodwill, and detailed with black puffy paint. I used a black belt from my closet, cut up an old t-shirt, borrowed black boots from my boyfriend (and future husband) and sprayed my real hair orange. The entire outfit cost me under $10 to make.

I won first place in the Halloween contest at the bar that night! And while my ribbon suspenders didn’t last past one Halloween, my love for the Leeloo cosplay stayed with me and I went on to make and sell a better version of the costume years later in my cosplay boutique. I made the suspenders from stretch vinyl and ditched the stapler for the sewing machine. The pants were detailed with black elastic rather than paint. I even added a laminated multipass. The version I sold was officially called the Futuristic Element to avoid copyright issues.

I made and sold hundreds of these costumes since I was the only person making them for many years. I closed my shop four years ago after the birth of my son, and also packed away the newest revision I had been working on – a version of the suspenders made with latex. I felt my post-baby body was not ready for this belly-baring outfit. As the costume sat in the drawer, hidden away for several years, I contemplated selling it before ever even wearing it. I struggled to accept my new post-baby body shape, and I wasn’t sure if I was EVER going to be ready to wear it again.

Also, a quick search on Amazon showed me there’d be no point in making and selling them anymore since it was now being mass produced and sold online – 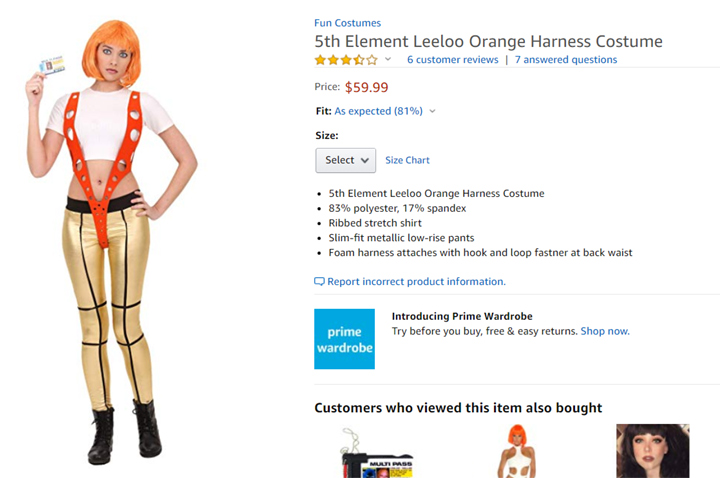 I spent a lot of time learning to work with latex and studying screenshots of the costume just to make that new pair of orange suspenders. Every time I went to sell the outfit, I’d change my mind because it felt like giving up. Then, with a new space themed GAAM event coming up, I decided to pull the costume out one more time and try it on.

I may not be the exact size and shape as I was at 23, but I’ve gotten close enough to my normal size to be happy with it. So what’s my fitness secret? To be honest, it was mostly just life. I actually quit the gym about six months ago. My cardio is now a combo of working on our yard renovation, housework and chasing after a four-year-old who never stops. My strength training involves carrying heavy objects like rock and soil from one side of the yard to the other and doing half of my activities while holding a 30 lb. child. And after a day of that, I try and fit in a stretching session that could be considered “full-contact yoga” as I stretch while my son treats my yoga poses like a morphing jungle gym.

It’s really crazy the way having a baby changes your shape down to your bone structure. I’ve finally gotten back to my original before-baby weight, but it isn’t the same. Some parts widened out and other parts seem intent on retaining a certain squishiness. Growing and housing a human for ten months is no small task!

I was apprehensive about trying on the costume, but it actually fit pretty well! I was happy to see the latex held up over the years. I did need to update the top and belt, which were both falling apart, but the rest of the outfit was in good shape. So twenty years after first donning a pair of orange suspenders, I’ll be reprising my role as the supreme being Leeloominaï Lekatariba Lamina-Tchaï Ekbat De Sebat … aka Leeloo.

The event is this Saturday night, so I’ll update my post afterwards with the final photos!

We had fun trying out these @squaregles building sets thanks to @tryazon ! Everyone had fun building and playing.
A little snippet of the video I posted today on YouTube showing how to use the Chill Pill for anxiety, panic attacks and insomnia.
My centerpiece is all ready for Thanksgiving! I took a flower arranging class this weekend with @gotflowers_jax . This is my 3rd one and each time I learn something new 😊
Heinz has a new thing called Dip & Crunch where are you take your burger and dip it into a secret sauce and then dip it into crunched up potato chips which they called potato crunchers.
The gift for the guy that doesn’t like a bulky wallet! The Slim Minimalist RFID blocking wallet by Mountain Voyage Co. is super slim but holds up to 15 cards and 8 bills and easily fits into your pocket.
The hardest part is not eating the whole chocolate bar before I can get a picture of it 😂.