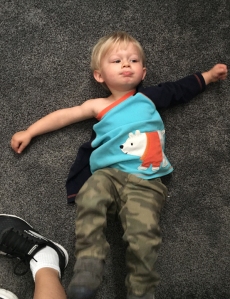 Every day starts off with grand intentions. He’s going to eat all his breakfast! Then we brush teeth! Serious potty training starts now! Then it takes about two minutes into the morning for it to all go to hell and I’m giving the kid M&Ms for breakfast just so I can sit for a minute and have a cup of coffee without being harassed. So here’s my list of my top five “Mom Fails” that happen on an almost daily basis:

1) Tooth Brushing – He hates it so much that I usually have to straddle him, pin his arms down and then brush all the teeth I can get to as quickly as possible. We just had his first dentist visit recently and coincidentally, they actually recommended the pinning them down method! I guess that’s a Mom win after all.

2) His Hair – The kid needs a haircut. I sent him to pre-school this morning looking like a toddler Einstein, and not in good way. I even tried applying a hair smoothing product and it refused to do anything but stick straight up.

3) The Bribery – I know I’m setting myself up for failure here, but I usually get him a toy at the grocery store or candy at the checkout line. I can almost enjoy our grocery store outings this way. But he expects it now. In fact, he asks to go to the grocery store all the time because he thinks it’s a magical place of new cars and chocolate.

4) The Food – He would exclusively eat M&M’s and fruit gummies if given the opportunity, so I’ll do anything to get him to eat solid food. Hotdogs for breakfast? Sure. A fried egg and peanut butter from the jar for dinner? Yep that’s happened. These are obviously not the best choices, but all my efforts at good wholesome meals end up on the floor so I figure I’ll just at least feed him some something he will eat.

5) My Restaurant Tactics – Taking a toddler out to dinner is a unique form of torture. In an effort to not just stuff my face while trying to keep him from escaping, I will let him do whatever keeps him quiet within reason. Last night he entertained himself by sticking his straw in my margarita, then licking it. Don’t get judgy, it was mostly just lime flavored ice. He also likes to lick all the tortilla chips and then put them back. That’s why he gets his own bowl of chips now.

So are of these really fails? No, I’m pretty sure they’re necessary survival tactics for parenting. (Though we could use some improvement on the dental hygiene angle.) I think a lot of parents will look at this list and be like, been there, done that. So what’s your  #MakingItWork moments?