What a Stay at Home Mom Really Wants for a Gift

I know we have just left gift-giving season, but there are plenty of other holidays ahead so maybe one husband will read this and if I can help one mom, I’ll be happy. I’ve tried to explain this to my own husband, but it isn’t really working. I think guys are more wrapped up in something tangible, and what a mom really wants, at least this mom, is the gift of time.

So how do you gift time?

Here’s an example: My husband knows I love going to a very special spa in town. For Valentine’s Day, right after our son was born, he got me a $200 gift certificate for that spa. Guess who still has a gift certificate to use?

While I love the thought behind it, it would have been better to give me a card with a date inside and the message that he would be there to watch our son and I could make an appointment for the spa on that day, at any time I wanted, for as long as I wanted.

That’s the gift of time.

It’s easy. It will never be returned due to being the wrong size. But it should be at least three hours or more. A full day of freedom if possible. Because freedom to do what we want is the main thing we lose when becoming a mom.

I don’t think guys get this. Last week I went to lunch with my friend Meisha. I was gone just over two hours. I knew my husband had some stuff to do around the house (he always has stuff he wants to do) so I came back right after. A couple days later he mentioned going to get a drink with a friend and I figured no big deal.

So off he went and must have been having a great time because he returned SEVEN AND HALF HOURS LATER.

I cannot tell you the last time I had seven hours to do what I want. Our son does preschool two mornings a week and that’s only five hours! I start feeling the guilty tug after a couple hours when I’m out and get the feeling “I should return home” and go back to my mom station. Also because I usually get a text asking me when I’m returning.

I know when I leave the house, I will usually be back sooner than I say. I know when my husband leaves, if he is meeting friends, I should just not plan on seeing him for a while. And if he wants to do something, he just schedules it, while I have to consult with him, a babysitter and hope the moon and sun are in alignment before I can get something done on my own.

And while I’m not complaining about that pretty little purse I got for Christmas (moms like actual stuff too) I’m just saying that the one thing I really want is something I can’t order online.

* I’m happy to say I do actually have a spa appointment at the end of January. Let’s see how long I can make it last! 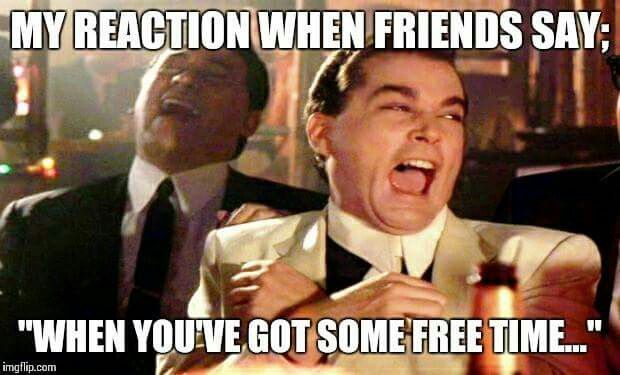 There’s no such thing anymore…